Eden Sharp is the author of the crime novel The Breaks: An Angela McGuinn Thriller, book one of the Vigilante Investigator Justice Series.

What should readers know about your writing?

I wanted to write the type of book I like to read. For me that’s a fast-paced thriller, with some sassy dialogue, a cool protagonist, and plenty of action. (And a little sexual tension is always a bonus!)

I love the way that crime thrillers give us an access-all-areas pass into an underbelly of society that is usually obscured, allowing the exploration of dark themes.

I also enjoy crime, mystery, suspense and the thriller genres in particular because of the way they often include social commentary. I find you can learn a lot about the time in which titles were written which is something I enjoy when I read classic detective fiction.

I like to mix it up: private investigators, good and bad cops, three-letter agencies, the government. Overall, my utmost priority is a focus on fast-paced prose with increasingly higher stakes that build towards an adrenaline-packed climax guaranteed to keep the pages turning.

What inspires you to write?

I’ve always written. I got a prize in primary school for a poem I wrote and I remember being so thrilled. Then when I was in high school, I invented what I thought was this really cool American TV cop show and my English teacher used to mark my scripts in his own time(God bless you wherever you are now).

Apart from reading, it’s the thing that makes me the happiest. Also I teach fiction writing and publishing to university undergraduates and they are so inspiring to me. We have some great discussions and workshops and they come up with some awesome stories.

What advice would you give to other writers?

Two things really. Writing is a vocation. It should be something you do because you love it and you should perfect your craft. It’s not an option if you think you can make a quick buck. It’s seriously hard work. You have to show up whether you’re inspired or not. The key I think with anything must be persistence.

Secondly, I tell all my students this from day one but sometimes it takes them three years to really get it: you have to give yourself permission to write rubbish. All first drafts are bad. Self-doubt is part of the process of being a writer but you have to switch this off when you’re first trying to get something down on paper/screen out of your head. I think writers’ block is actually when people try to get something that’s perfectly crafted from head to page. You need to mine plenty of dirt in order to find the gems in it. Writing is about what you take away not what you put down. You have to have the raw materials first so that you can fashion them into something good later. Self-criticism should only come at the editing stage not at the creating stage.

That is good advice. I’ve suffered from self-criticism while writing my stories and know it can be a crippling condition. I wrote this post about it: Writer’s Block and Edititis.

What are you working on now right now?

I’m working on book two in my series. It follows immediately on from The Breaks. It’s called GET9 and my investigator’s criminal past is catching up with her. The pressure is really piling on and now the government and a couple of three-letter agencies have got involved things are not so easy. People she thought were friends may no longer be allies and her relationships are complicated by figures from her past. The stakes are a lot higher!

Which writers are your favourites?

I love Andrew Vachss and how dark and visceral his Burke series is. Also Michael Connolly, Robert Crais, Dennis LeHane, Lee Child, and Barry Eisler. I mean, what’s not to love about Jack Reacher and John Rain?

They are great writers, Eden. Michael Connolly is one of my favourites, too. I always look forward to reading his Harry Bosch novels.

Thanks for the interview, Eden. 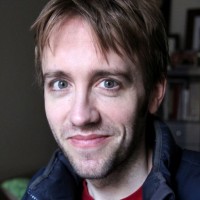